Independent family-run regional brewer Elgoods, based in Wisbech, Cambridgeshire, selected the Cambridge Beer Festival to launch its new keg Apple Wheat Beer and have been bowled over by the response.  Named ‘QE’ (Quintessentially English) visitors just couldn’t get enough of its new apple-flavoured brew and the Elgood’s stand had to be re-stocked three times at the recent festival which was held on Jesus Green in Cambridge.
Elgood’s is run by the fifth generation of the family with three sisters sharing the responsibilities of the company.  This newest Elgood’s brew is their inspiration and is available in bottle or mini-kegs*.  Made with wheat, fresh coriander, orange peel and apple, the beer has a light refreshing flavour that visitors to the Festival have loved. The Cambridge Beer Festival is the United Kingdom’s longest running and second largest regional CAMRA beer festival in the UK. It features a wide range of local and national beers of all styles, as well as cider, perry, mead, wine bottled and draught beers from around the world. 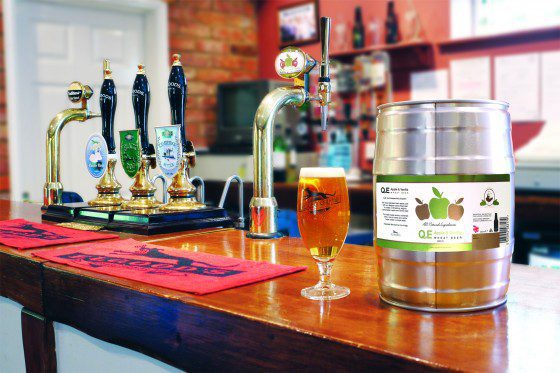 Claire Simpson, Marketing Director at Elgood’s commented: “We didn’t really know what to expect as although my sisters and I really enjoy the beer, it is the first time we have had the chance to hear what consumers think of it.  We have been delighted with the positive response and need to now get brewing more!” The sisters have plans to develop the new range and a Cherry flavoured beer is planned for the future.  There has already been some export interest in the new Apple Wheat beer with plans to sell it in China and Russia later in the year. Closer to home the beer is available through Elgood’s own pubs in Cambridgeshire, Norwich and Lincolnshire.  It is also available through selected Farm shops.
For more information e-mail the brewery directly on info@elgoods-brewery.co.uk or telephone +44 (0) 1945 583160.
You can follow Elgood’s Brewery on twitter: @ElgoodsBrewery or Facebook: https://www.facebook.com/elgoodsbrewery